Latest Trends For Mobile App Development To Check Out In 2016 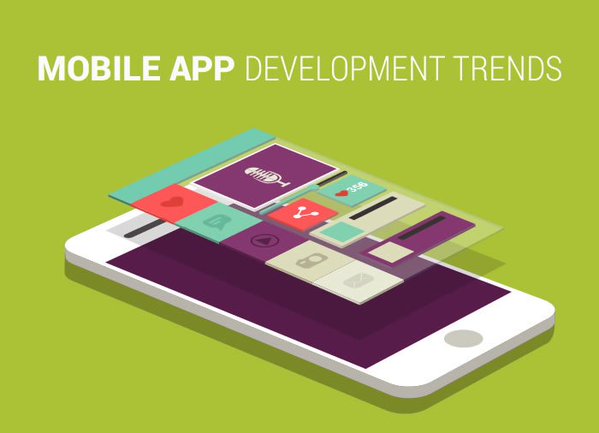 Year after year there is one industry that has continued to evolve and thrive and that is the mobile application development industry. The market for mobile app has grown from being applied to just tablets and smartphones to being used in Internet of Things and wearable devices. Focus also increased on mobile app marketing and app analytics. In this year there are 15 new trends in mobile development. Here is the list.

Demand for different mobile apps is increasing and this is tough for enterprises to cope up with. Demand is growing and businesses are keen on launching their goods at fast pace. Timeframe reduction between ideation right up to launch and shortening lifecycle development is right now the main focus for Mobile App Development Companies during the current year.

In the market, it is expected to see rapid framework and tool development. To meet expectations of customers and help faster apps arrival, a solution was launched recently. The main reason for this was to ensure that customers were provided with continuous value at every application building stage. Rapid Iterations and Quick to Market have been the main ingredients. Both customers and the market responded positively.

In the year 2016, a key role has been played by cloud technology in development of mobile app. As far as the use of multiple wearable tech and mobile devices is concerned, there has been an upsurge. Main focus of app developers should be to develop mobile apps in a way that sync and integrate well on multiple devices. Due to cloud technology, better application building will be possible. Applications can be accessed with different devices with similar date, features and functions. Award winning platform for cloud based development of applications is also in place this year. Customers will be able to build better mobile apps and on a number of devices having similar content and functionality. No technical knowledge is required to create apps with the help of this platform.

In the year 2014 a number of cases related to leakage of information and hacking were reported. In 2016, around 75-85% of the mobile apps will not clear basic tests related to security according to Gartner’s prediction. Sensitive information will be cracked by exploiting security gaps present in mobile apps, by the hackers. So on mobile devices, a big challenge that remains is security. In 2016, one key point that needs to be acted upon seriously is security of mobile apps.

In the advertising and retail sector, the boundaries between offline and online have begun to blur, thanks to Beacon technology. This technology in iOS has been integrated already by Apple. It communicates with Android and the iBeacons network. In 2016 it is expected to follow similar lines. Besides access to internet, many more services will be provided by Wifi in the coming years.

Lots of businesses have made investment in WiFi, which is the primary benefit. In the market it is seen that smarter phones are being used, the cellular plans are getting more expensive as a result of a splurge in consumption of data. As far as outdoor experiences are concerned, seamless working of WiFi is seen, even if there is edgy connectivity. Customers are able to get specific content right on their mobile devices.

Wi-Fi MX a platform also had been introduced in 2016 so that customers are engaged better through WiFi on their mobile devices. They can have better access to content and service that are locally relevant. As consumers walk by they will be able to get right information and create retails smartly by adopting these latest technologies developed by reputed IOS App Development Companies.

In consumer electronics and mobile technology, during the year 2014, the hottest trend is Wearable Technology and the credit for this goes to Apple Watch. So far it was only in the health care and fitness industry that more focus was laid on apps for wearable devices.

As per research indicated by eMarketer, in 2014 around 19% sales in retail commerce is expected through tablet or smartphones. This is a positive trend to be seen in the coming 4-5 years as many people are expected to adapt to M-Commerce.

Instead of using credit or debit cards for purchasing and making payments, people will use mobile phones. Google Wallet and Apple Pay are also expected to become common by the year 2016. Need for cash, credit cards or debit cards will be eliminated for processing transactions.

Multiple devices are being used by more and more people, to connect, thanks to the growth of IoT (Internet of Things). As apps get integrated on more and more connected devices, they will mature further. Developers of apps will get inspired more and their focus on user experience on different devices will get better. Breakthrough is expected in customer engagement platforms that are Beacon technology or WiFi based. At the right place and time, businesses will be able to reach customers via the apps, due to IoT.

Growth in Wearable market and IoT is expected. Accordingly the requirement of analysis and tracking of app performance will increase amongst decision makers in different businesses. Focus on app analytics and big data will increase. Apps will be made more successful and engaging to meet expectations of clients, when apps are added with new data collection methods.

Enterprise Apps will see a growth in 2016. To deploy and develop mobile apps across organizations, platforms for Android App Development India will be leveraged by approximately 35% of the large enterprises. A major boost is expected with IoT for Enterprises. B2B applications exchanges are also to emerge in 2016. Expected growth in Enterprise mobile management will also be seen in 2016. To manage and build applications app developers can make the most of tremendous opportunities for the Enterprise market.

By 2016 it is expected that spending for In-app advertising would cross $7.1 billion, according to Juniper Research a research firm which has made a new study. Mobile Ad networks are expected to go beyond banners and it will experiment and integrate with different ad formats. As far as monetization is concerned, mobile In-app purchases and advertising will be given primary focus.

In 2016 technology will be lead by user experience. Usage of wearable devices, tablets and smartphones is increasing so app user experience is expected to be more critical and challenging than before. In creating improved user experiences, app developers can make best use of Analytics data.

Every year, techniques of marketing mobile apps have been evolving. As compared to user acquisition more focus was laid on user management by app marketers in 2014. More focus was laid on user management and many developers and marketers began realizing how organic users were more important. Organic users proved to be more loyal than paid channel acquired users. In 2016, apps are expected to become more successful with App Store Optimization. With Wifi services based on Beacon and Location, marketers will find it simple to become targeted based on location of users and ensure apps promotion with other offers.

In 2014, a lot of popularity is being gained by HTML 5 as well its development tools. More hybrid mobile apps are being created by businesses that adopt this app as it gets mature. It works on a range of platforms with greatest ease. With rise of hybrid apps based on HTML, a decrease in the native apps is expected in 2016.

A gradual increase is seen in mobile games to multiplayer from single player, in 2014. Integration between social media and social interaction has become important with rise of multiplayer games. As games get updated regularly and their demand increases frequently, it is expected that mobile games will be more on cloud in 2016. Developers of games will have to ensure continuous monitoring and management.

Popularity of location based WiFi services, Beacon and IoT has been increasing. With the help of these technologies, managing infrastructure of cities gets easier for various governments all over the world. Right from networked solutions for parking, safety of citizens, managing and monitoring traffic and more, solutions in the widest range are provided by these technologies. With the help of smartphones, office spaces and smart homes can be managed and connected. Companies related to real estate can make the most of these technologies. Mobile experiences can be best created best by app developers.

Leading developers of mobile apps are surely going to feel excited and prepped about taking a dive in latest trends for developing mobile apps in 2016.